Thailand is a country famous for tourism and its traditions. It attracts many European tourists every year; every tour operator shows more offers about Thailand. The sad part of this is that a part of this touristic flow has a known sexual aim. And Thailand is sadly known for this.

Italy has since decades different ties with Thailand: touristic flows, commercial flows (it is proven by the existence of a Italian-Thailand chamber of commerce) and migration flows. Particularly the number of Thai immigrants in Italy has been slightly increasing in the last years:

A good aspect about this is the formation of local communities, which live and diffuse the typical Thai traditions, from the Thai box to Thai food and feats. Since years we see in main central cities Thai restaurants and Thai wellness centers (with even courses of Thai massages and Thai language). Such communities have generally a good reputation, showing mind and cultural openness, willingness to integrate and cooperate with local people. Usually we don’t notice public order problems related with Thai communities.

A sad aspect is that part of the immigrants (young girls) brought in Italy by Thai (or mixed) criminal organizations (but the problem involves many countries and a European wide organization is even known) mostly promising then a regular job, but, at the end, exploiting them for the prostitution. It is very easy to find in different places announces of Thai women offering Thai (particular) massages in reserved and hidden places.

There are, however, a number of stories. Women coming here following Italian men (married sometimes in Thailand, or known in Italy).

Thai girls are a continuous topic in Internet, with pages and forums dedicated. Mostly it is due to their usual traditional beauty, but also because of differences in mentality and attitude. One of the most immediate differences noted, such as, is that it is more typical for Thai and oriental girls to smile at boys to hide insecurity or shyness (something which is very rare among general European and, particularly, Italian girls). Many forum participants say that approaching a girl in Thailand is easier, because (due to also a higher need for money) many girls try to get money from tourist both describing sad false stories (e.g. ‘my mother is very sick and we don’t have the money for the hospital”) or just offering companion or, even, sexual services. Many participants say in Thailand prostitution is not as shameful as in mostly European countries.

At a first view, reading Internet pages and forums or listening to travelers, Thai girls may look like easy and easy-going girls always familiar with strangers and tourists. They easy smile to guys (but mostly it is a way to cover shyness; to mention that smiling in Thailand may have a lot of different meanings: even cases called “yim mai awk”; smile to avoid smiling). Furthermore prostitution in Thailand is illegal but quite common. But this chance is just what you find in certain, limited touristic places, where girls are mostly looking for money (and this brings very often to frauds, with false stories or false promises of love and similar).

Listening to Phon, a 43 years old woman, living in Italy since she married an Italian guy 5 years ago, Thai women aren’t as independent and emancipated as their Western counterparts yet. With consequence of a different role Thai women have traditionally in the family and in the society.

Thai women can however, become rather cruel and aggressive in certain situations (which very rarely happens with Western women; more often we read in the news about violent reactions of Thai women against unfair husbands; mostly this reaction consists in the castration, literally and physically; it means cutting off his penis).

When they go abroad, they keep up usually strong ties both cultural and of kinship with the original family and country, showing always less independence and emancipation (to say even shyness and lack of confidence) compared to Western women. In facts, at a first view, Thai girls living in Europe (such as studying in universities) look younger and even more childish compared to Western girls. When they first arrive in a new country, try to open culturally and integrate with local people, but find this a bit difficult due to their cultural attitudes of discretion.

A girl living in Italy, Paring, during an interview, asked about the differences between Thai and Italian boys, found the question funny and argued that Italian boys are generally more open (even if it is not always the case).

When it goes on marriage, cultural differences seem, even if they are not so impressive. Still listening to Phon, Thai women have, compared to occidental counterparts, a more sweet commitment to the husband. Due to the fact that they are in Thailand more dependent from them.

Often such aspects are more appreciated in occidental families than in Thailand. Thai men are often traditionally less interested in the family life (to mention, however, the violent reactions of Thai women against unfair husbands: see before). Generally, says Phon, when the marriage works, Thai women are very happy to live in Western countries. Another usual difference between Thai women and their western counterparts can be, such as, in the housekeeping work. While mostly Western women can complain when they find themselves doing it alone, trying to help a Thai wife could mean that you don’t like the way she does it.

(I have made some changes to the story, such as it is not legal in Thailand to sell sex like the writer thought. All ideas and thoughts is from the writers. If you have different opinion you are welcome to contact me for your story.)

P.S The Picture is from when i was in Italy, nice shoes? D.S 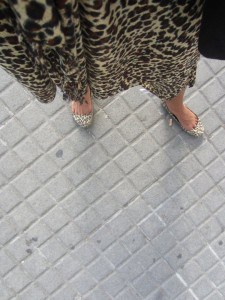 View all posts by Starfisher →