The most recent one was a Thai girl in Chiang Mai saying she been used by an American man for sex but he promised to marry her.

The man had sex with her one time and left her and she felt cheated out a marriage. She turned to a foundation in Thailand to get compensation for her “sexual adventure”. Apparently the man was older than he said he was and he did not want to marry her after she her pants down.

For me this is ridiculous, if you meet and have sex you do not have to get married. Maybe you did not match maybe you did not was the one. But if he promised her to marry after they had sex that’s another story.

I know many foreigners living like this in Thailand, praying on older Thai ladies desperate to get married and having sex with them. Some Thai ladies probably agree on consensual sex but others might feel cheated since they planned to get married.

Now some Thai people had enough of foreigners trying to cheat them and they opened a Facebook page name and shame all foreigners they think cheating Thai people.

The problem some of these gangs are using photos from other people and the scammers are not in website the victims are. So if you are in this website and not a scammer you should contact them and the police and make sure you that nobody use your name.

If you find any of these photos or profile in your Facebook friend list delete them and report them as a fake profile. 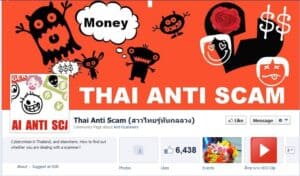